Twice a year, more than 24,000 greater sandhill cranes descend on the San Luis Valley, an area larger than the size of Connecticut but more than 7,000 feet higher in elevation. Like millions of Americans who flock to Arizona during the winter months, these greater sandhill cranes spend the winter in Bosque del Apache National Wildlife Refuge in southern New Mexico. In spring, they fly to the San Luis Valley, forming a bottleneck in the skies and in the wetlands. They’ll stick around for about two-and-half months, fueling up before continuing north to places like Steamboat Springs, Colo., Idaho, Wyoming and Montana. When fall arrives, the sandhill cranes head south, descending on the San Luis Valley again on their way back to New Mexico.

For over 38 years, the Annual Monte Vista Crane Festival has offered a fantastic event during the Sandhill Crane's spring migration so that interested visitors and residents alike can gather and appreciate this amazing spectacle together. For 2021, the event is online which makes the event accessible to anyone interested in joining. It takes place on March, 12 at 7:00 pm. Learn more about this event here.

You’ll see literally thousands of the greater sandhill cranes at the Monte Vista National Wildlife Refuge during the festival. Known for their long neck, long legs and red-crown, sandhill cranes fill the air, making a “gar-oo-oo” noise as they fly overhead. The song-filled (bird songs, that is), three-day event offers a ton of activities, including guided birding tours, tours to other special places in the valley, an arts and craft fair, keynote speaker and more. It’s really something to chirp about. 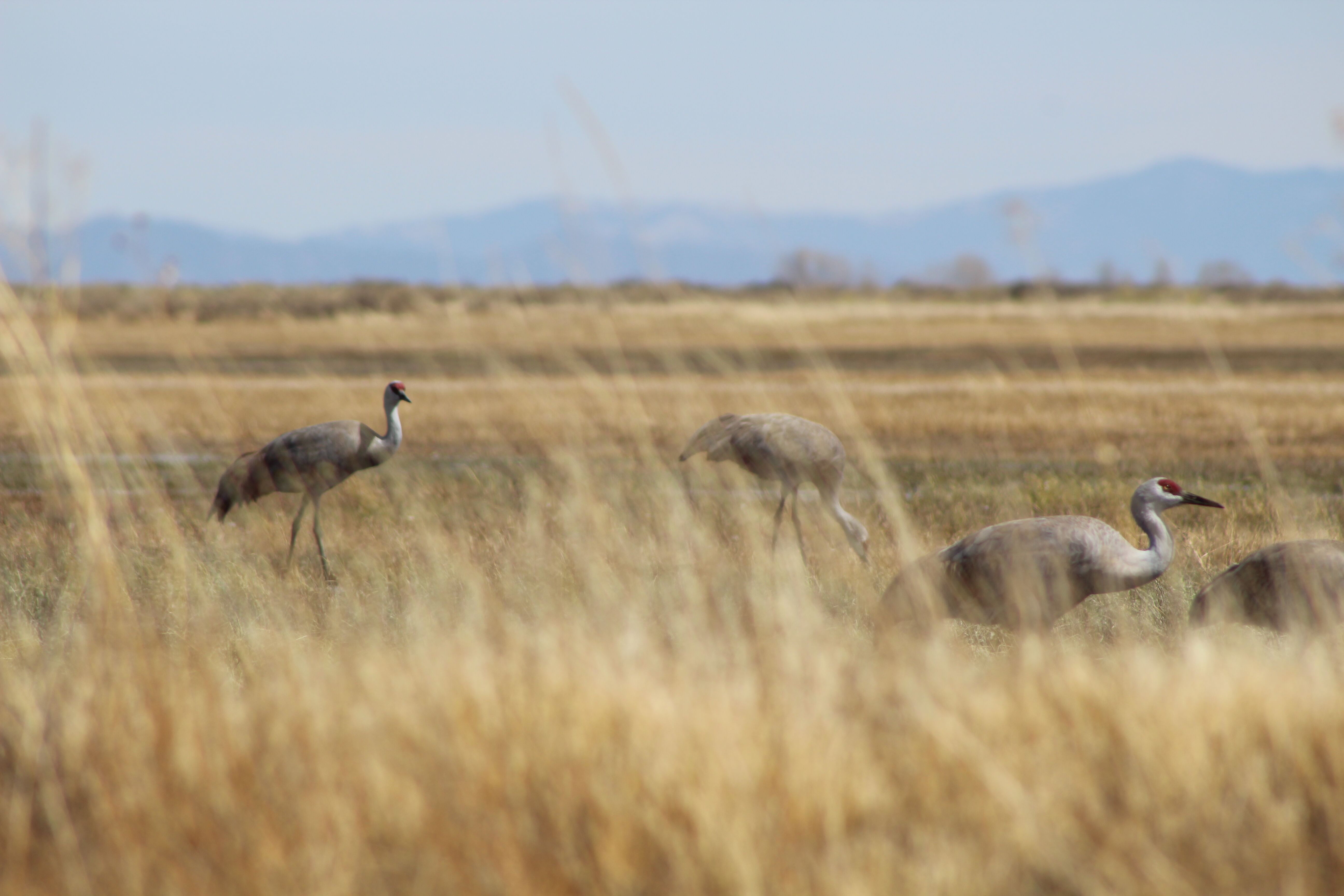 Ancient mammoths and Pleistocene-era camels and horses lived in the Monte Vista National Wildlife Refuge, according to recent archaeological and geomorphological studies. While these animals are extinct, having lived during the Pleistocene era that stretched from 2.5 million to 12,000 years ago, other animals have taken their places. If you’re willing to take time to listen, be a little bit patient and open your eyes, you’ll discover an entire ecosystem at your feet. In Alamosa National Wildlife Refuge, you’ll spot curious-looking porcupines whose coats have more than 30,000 quills. At both refuges, you may spot the resident elk herds and mule deer grazing on the valley floor.

What attracted animals thousands of years ago to the San Luis Valley remains the same today. It’s water. With the Rio Grande  snaking through the valley and a confined aquifer that spilled into Spring Creek, the Monte Vista National Wildlife Refuge was formed in 1952, in part, to save Canada geese. At the time, the species was teetering on the edge of extinction. That’s a hard fact to believe today since there are between 4.2 million to 5.6 million Canada geese in North America today, according to Living Bird Magazine.

But there’s more than geese and sandhill cranes among the cattails and wetlands at the refuges. Bring your camera to get beautiful shots of birds in flight and in the water. At the Monte Vista refuge, you may see a white-faced ibis. And in fact, the refuge is one of the few white-faced ibis nesting colonies in Colorado. There are also black-crowned night herons, snowy egrets and western grebes. At both refuges, you may even see an American bittern, a secretive marsh bird. It’s a medium-sized heron with a shorter legs and a thicker neck that is brown and white. Its calls sound like “pumper-er-lunk,” according to the Cornell Lab of Ornithology.

“Usually, they are very difficult to see because they look just like the cattails,” says Suzanne Beauchaine, referring to the American bittern. “At noth refuges, you are very likely to see more than one. Look for them on the edge of the wetlands, along roads, river or trails.”

At the Alamosa refuge, keep your ears open for the song of the southwestern willow flycatcher. It sounds like “fitz bew,” according to the National Park Service. The southwestern willow flycatcher is an endangered species that thrives in native riparian habitats that have disappeared over the last three or so decades. Ranging from brownish-olive to gray-green, it’s a small bird with a pale yellow belly that’s less than 5.75 inches from the tip of its tail to the tip of its beak.

For a two-mile out-and-back stroll, set out on the Bluff Nature Trail. But first stop by at the Bluff Overlook where you’ll find interpretive panels and a beautiful vista of the river valley. Below you’ll see gorgeous wetlands teeming with birds. Often, you’ll see elk, too. Drive another half-mile to the trailhead.

“I love this trail in the fall when we have a native sunflower that blooms and attracts the songbirds,” Beauchaine says.

For a longer hike, lace up for the four-mile out-and-back Rio Grande Nature Trail. Leashed dogs are welcome on both trails. It parallels the Rio Grande whose headwaters begin at the foot of the 13,478-foot Canby Mountain that protrudes upward in the San Juan Mountains. From there it continues into the San Luis Valley on its 1,896-mile journey to the Gulf of Mexico. Along the way, it provides critical water for farmers, cities, wildlife and even serves as the line for a portion of the U.S.-Mexico border. You’ll discover beautiful cottonwood trees and willows lining this riparian area, which provide critical habitat for the endangered southwestern willow flycatcher that line this riparian habitat.

With the snow-capped Sangre de Cristo Mountains across the valley to the east and the San Juan Mountains hugging the west side, you’ll take in gorgeous views and a tremendous sense of solitude on this 2.5-mile scenic drive through Monte Vista National Wildlife Refuge. Along the way, there are multiple pull-offs and paths lined with colorful interpretive panels with drawings of the refuge’s inhabitants. For instance, if you stroll the Meadowlark Nature Trail, you may spot a great blue heron with its long, thin legs, the western meadowlark with its characteristic yellow belly or a mountain bluebird, identifiable by its solid blue body.

“The key is to roll down your window, get out and walk a bit,” Beauchaine says. “If you’re not listening, you’re not going to see as much wildlife. That’s what birding is all about.”

Visiting each refuge is free, so why not explore? Both are open an hour before sunrise until an hour after sunset. A visitor center at the Alamosa National Wildlife Refuge is open intermittently as staffing allows. Bikes are welcome on the scenic drives.

Tori Peglar is a travel writer who loves uncovering the gems of Alamosa and the San Luis Valley and writes about national park travel for National Park Trips Media.