Colorado's San Luis Valley thrives on its agricultural background and is nationally known for it's potato production. Also flourishing in this high-mountain desert are cool weather crops such as lettuce, spinach, and quinoa. Although ranching is not in abundance here, we can boast of such delicacies as free range Bison and Rocky Mountain White Tilapia. Throw in the savory influence of traditional Hispanic dishes, and we promise you will never leave the San Luis Valley hungry!

Agriculture has long been the basis of the economy in the San Luis Valley. Unique in world topography, the elevation of the valley floor is 7,600 feet above sea level. The San Luis Valley is a large, flat intermountain valley that varies from 20 to 50 miles in width and is about 100 miles north to south. All crops are grown with irrigation water whose source is the abundant snow in the surrounding mountains.

Crops are irrigated by some surface flooding or mainly by center pivot sprinklers. The principal crops grown here are potatoes, alfalfa, native hay, barley, wheat, and vegetables like lettuce, spinach and carrots. The Valley's spring and summer are filled with warm, sunny days and cool nights; the combination for a perfect growing season. The cool weather also contributes to the smoothness of potato skin and reduces second-growth roughness. This isolated alpine desert with its cold winters helps eliminate or reduce pest and disease problems, reducing our need for many pesticides.

The harvest begins in September with about 98 percent of the crop going into storage before being shipped. The soil in the Valley is a fertile, loose-packed loam. This quality is necessary because potatoes grow in the ground and the soil must be able to shift easily to allow for the potato's growth. Because the Valley receives less than seven inches of rain a year, it qualifies as a desert and must be irrigated. A natural underground water aquifer, recharged from runoff from heavy snowfall in the nearby mountains, offers a plentiful irrigation source. The modern center pivot sprinkler, used by almost all growers in the San Luis Valley, allows the grower to control the irrigation.

A Food-Lover's Guide to Alamosa

An Inside Look at the Impressive Beer Scene of Alamosa 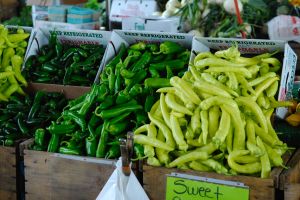