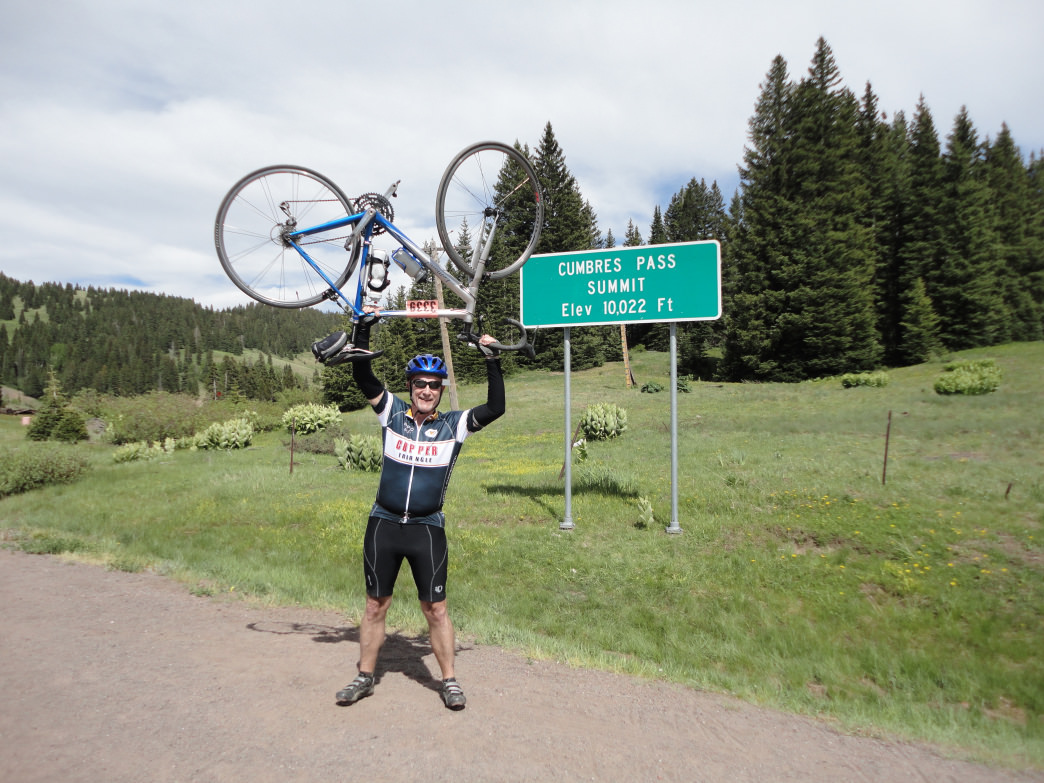 Cumbres Pass is no stranger to human travel. The San Luis Valley’s earliest residents, including groups of Ute, Navajo, Apache, and Comanche, were responsible for creating trails throughout the San Juan Mountains. One of these paths, worn into the earth over time by thousands of feet, was over Cumbres Pass, and led merchants from the San Luis Valley into New Mexico’s Chama River Valley. Today, State Highway 17 follows a very similar route over both Cumbres and its neighboring pass, La Manga, and road cyclists can experience the area much as it has been for hundreds of years.

What Makes It Great

In addition to following the route historically used by traders between the San Luis and Chama River Valleys, a ride over Cumbres and La Manga passes offers gorgeous scenery and challenging, high-elevation summits. La Manga, the taller of the two passes, measures up at 10,230 feet, but Cumbres isn’t far behind at 10,022 feet.

From Antonito, head west on CO-17, where you’ll follow the Conejos River. By about seven miles out, Highway 17 is bordered by cliffs to the north and wide-open views to the south, and at mile 13, you’ll enter Rio Grande National Forest. Here, the highway meanders through meadows of wildflowers in spring, plus pine and aspen groves year-round. A mile later, the rolling hills abruptly become a true mountain cycling experience: You’ll encounter a few short sections of 7 to 9 percent grades, with one particularly tough section about 22 miles into the ride. The climb settles in from there, sticking to about 5 percent until the La Manga summit, 27 miles from Antonito.

From La Manga, take in the views and enjoy a brief, three-mile descent to the base of Cumbres Pass, which has been compared, in terms of difficulty, to the ride up Rabbit Ears Pass. It’s considerably shorter and easier than La Manga. Keep an eye out for the railroad tracks, which mark the summit, then reverse the route to head back to Antonito.

Who is Going to Love It

The passes have been compared to notoriously difficult Slumgullion and Gore passes, minus the incredibly steep grades—those two have long stretches with grades of up to 9 percent, while Cumbres and La Manga max out at about 5 to 6 percent with only a few short sections of 9 percent.

This ride can be customized based on your fitness and the weather, it’s possible to ride both passes from Antonito (72 miles round trip)—or, if you’re feeling ambitions and there’s no storm in the forecast, all the way from Alamosa (130 miles round trip). There are also a few dirt pullouts along CO-17 between Antonito and the La Manga summit, if you’re looking to shorten your ride—just don’t leave your car overnight.

Keep in mind that there are no amenities between the two passes. Bring along plenty of water and keep an eye on the weather. This ride is also fairly remote, so don’t plan on having cell service while you’re out. Finally, be alert for trains; you’ll cross several sets of tracks and it’s not unlikely that you’ll encounter a train occasionally.